Previous Next
‘Just a matter of when’: the $20bn plan to power Singapore with Australian solar

‘Just a matter of when’: the $20bn plan to power Singapore with Australian solar

Ambitious export plan could generate billions and make Australia the centre of low-cost energy in a future zero-carbon world. 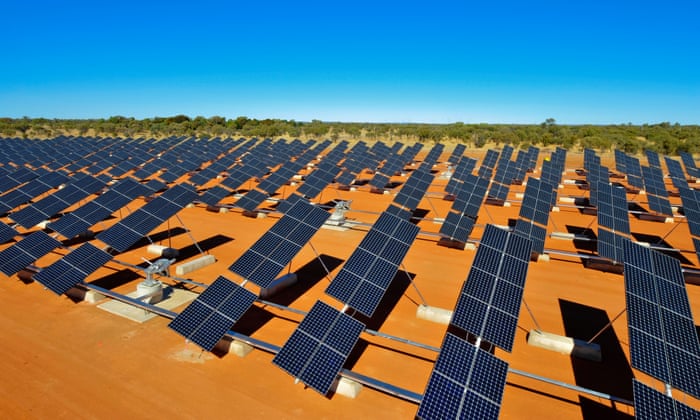 There are ambitious solar and wind projects planned for both the Northern Territory and the Pilbara in Western Australia. Photograph: Alice Solar City/AAP.

The desert outside Tennant Creek, deep in the Northern Territory, is not the most obvious place to build and transmit Singapore’s future electricity supply. Though few in the southern states are yet to take notice, a group of Australian developers are betting that will change.

If they are right, it could have far-reaching consequences for Australia’s energy industry and what the country sells to the world.

Known as Sun Cable, it is promised to be the world’s largest solar farm. If developed as planned, a 10-gigawatt-capacity array of panels will be spread across 15,000 hectares and be backed by battery storage to ensure it can supply power around the clock.

Overhead transmission lines will send electricity to Darwin and plug into the NT grid. But the bulk would be exported via a high-voltage direct-current submarine cable snaking through the Indonesian archipelago to Singapore. The developers say it will be able to provide one-fifth of the island city-state’s electricity needs, replacing its increasingly expensive gas-fired power.

After 18 months in development, the $20bn Sun Cable development had a quiet coming out party in the Top End three weeks ago at a series of events held to highlight the NT’s solar potential. The idea has been embraced by the NT government and attracted the attention of the software billionaire Mike Cannon-Brookes, who is considering involvement through his Grok Ventures private investment firm.

The NT plan follows a similarly ambitious proposal for the Pilbara, where another group of developers are working on an even bigger wind and solar hybrid plant to power local industry and develop a green hydrogen manufacturing hub. On Friday, project developer Andrew Dickson announced the scale of the proposed Asian Renewable Energy Hub had grown by more than a third, from 11GW to 15GW. “To our knowledge, it’s the largest wind-solar hybrid in the world,” he says. 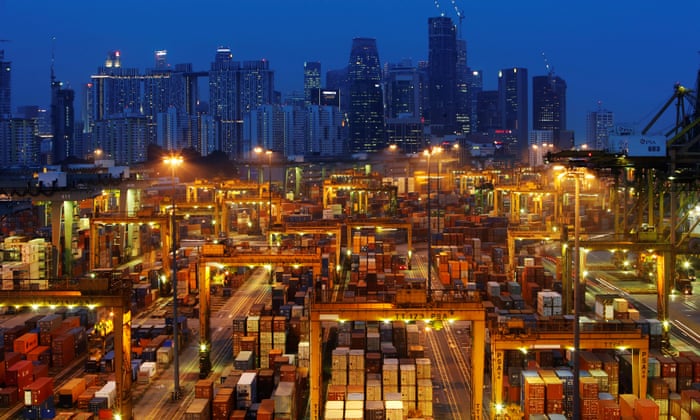 These developments are still at relatively early stages of planning. Both teams say it will be four years before they lock in finance, with production scheduled to start mid-to-late next decade. But renewable energy watchers are cautiously optimistic they could help spark a new way of thinking about Australia’s energy exports – one that better aligns with the country’s commitment to the Paris climate agreement, rather than broadening a fossil fuel trade at odds with it.

Opponents to Australia taking significant action on the climate crisis often point out the country is responsible for about 1.4% of greenhouse gas emissions, placing it about 15th on a table of carbon-polluting nations. A recent report by science and policy institute Climate Analytics makes the case that this underplays Australia’s contribution, which increases by 5% if fossil fuel exports are included.

The latter figure is expected to increase over the next decade. Australia is the world’s biggest exporter of coal and rivals Qatar as the leader in selling liquified natural gas (LNG). There is bipartisan support for a significant expansion of both industries, though government economists anticipate export earnings from coal will fall.

Ross Garnaut, former advisor to Labor governments who is now professor of economics at the University of Melbourne and chairman of the Australian-German Energy Transition Hub, makes the case that there is another way ahead. In a recent lecture series that is being turned into a book, he lays out his analysis of how Australia, with the best renewable energy resource in the developed world, could expand its energy production while significantly reducing global emissions.

Garnaut points to the transformative reduction in the capital cost of renewable energy and energy storage over the past two decades. As most of the cost of clean energy developments is capital (the fuel is free), he says the transformation has radically changed the ability of clean projects to compete with fossil fuels. Given capital costs are lower in developed countries, Garnaut says it means Australia can, if properly managed, be the centre of low-cost energy in a future zero-carbon world.

It would make it the natural home for growth in minerals processing for a world that increasingly values production powered by solar, wind and other clean sources. Industries that would flourish under Garnaut’s vision include familiar energy-intensive operations such as aluminium, iron ore and steel, and new opportunities in silica, lithium, vanadium, nickel, cobalt and copper.

“This will be the channel through which production of energy in Australia will greatly reduce emissions in the rest of the world. It will also be a foundation for a new era of economic expansion and prosperity,” he says.

Garnaut believes exporting electricity through high-voltage cable and green hydrogen will be a part of this clean energy future, though they would mostly be expected to come later. Sun Cable’s chief executive, David Griffin, is bullish about the possibility of his company helping power Singapore from the outback in less than a decade.

He says the project will use prefabricated solar cells to capture “one of the best solar radiance reserves on the planet”. But he says the major transformation that makes the farm possible is the advent of high-voltage, direct-current submarine cable, which he describes as the “greatest unsung technology development”. Sun Cable’s underwater link to Singapore will run 3,800km.

“It is extraordinary technology that is going to change the flow of energy between countries. It is going to have profound implications and the extent of those implications hasn’t been widely identified,” Griffin says.

“If you have the transmission of electricity over very large distances between countries, then the flow of energy changes from liquid fuels – oil and LNG – to electrons. Ultimately, that’s a vastly more efficient way to transport energy. The incumbents just won’t be able to compete.”

Sun Cable’s backers believe Singapore, as a well-regulated electricity market that runs mostly on gas piped from Malaysia and Indonesia and shipped as LNG, is ripe for competition.

Across in the Pilbara, the Asian Renewable Energy Hub proposal has taken

another tack. The developers – a consortium of InterContinental Energy, CWP Energy Asia, wind energy company Vestas and financiers at the Macquarie Group – began with a plan to send energy to Indonesia via sub-sea cable. That has been dropped in favour of green hydrogen – a shift driven, Andrew Dickson says, by falling costs and growing international and local interest that suggests a much bigger market.

An expanded hub proposal released this week says it will be spread across a vast area – 6,500 sq km, or about half the size of greater Sydney – and create 3,000 construction and 400 operational jobs. About two-thirds of the 15GW capacity will be met with giant wind turbines and one-third solar panels. The developers say up to a fifth of the total capacity is expected to go to large industrial energy users in the Pilbara, potentially including new and expanded mines and mineral processing. But most of the electricity generated will be used to run a hydrogen manufacturing hub.

The hydrogen would be sold domestically and exported, most likely to Japan and South Korea, which have expressed a desire to shift energy consumption in that direction. Dickson says producing green hydrogen at large volumes could open up possibilities such as using it to replace coking coal in steel production. It could allow an expanded version of the “green steel” model adopted in Whyalla by British industrialist Sanjeev Gupta.

Sanjeev Gupta: Coal power is no longer cheaper – and we’ll prove it

Dickson points to recent appraisals by the Australian chief scientist, Alan Finkel, and the International Energy Agency as evidence of hydrogen’s potential. “People are realising, after several decades of promise, that now could be the time for it to be a thing,” he says.

Griffin and Dickson both decline to comment on the role the federal government could or should play in developing green exports, although they volunteer that some local MPs and state governments are supportive. Both note the fact their proposals are off-grid has helped insulate them from politically loaded debates that pit renewable energy against fossil fuels.

Roger Dargaville, a senior lecturer in renewable energy at Monash University and member of the Energy Transition Hub, underlines the amount of work that is going into examining what a future of clean exports will look like. A recent project he was involved in suggested a 40-gigawatt sub-sea electricity cable into Indonesia – much larger than that initially proposed by the Asian Renewable Energy Hub – would be viable by 2035 if that country adopts a low emissions target.

Dargaville believes future exports will almost certainly be a mix of hydrogen, cabled electricity and minerals refined before shipment. He says no one should underestimate the scale of what would be necessary to replace Australia’s existing fossil fuel industries (coal and LNG industries are worth more than $100bn a year and employ tens of thousands) and that the political and technological challenges will be significant. But he stresses no one should mistake where international markets are taking us.

The only question is whether it is in the timeframe climate scientists says is necessary. “It’s not really yes or no, it’s just when.”

As the crisis escalates…

… in our natural world, we refuse to turn away from the climate catastrophe and species extinction. For The Guardian, reporting on the environment is a priority. We give reporting on climate, nature and pollution the prominence it deserves, stories which often go unreported by others in the media. At this pivotal time for our species and our planet, we are determined to inform readers about threats, consequences and solutions based on scientific facts, not political prejudice or business interests.

More people are reading and supporting The Guardian’s independent, investigative journalism than ever before. And unlike many news organisations, we have chosen an approach that allows us to keep our journalism accessible to all, regardless of where they live or what they can afford. But we need your ongoing support to keep working as we do.

The Guardian will engage with the most critical issues of our time – from the escalating climate catastrophe to widespread inequality to the influence of big tech on our lives. At a time when factual information is a necessity, we believe that each of us, around the world, deserves access to accurate reporting with integrity at its heart.

Our editorial independence means we set our own agenda and voice our own opinions. Guardian journalism is free from commercial and political bias and not influenced by billionaire owners or shareholders. This means we can give a voice to those less heard, explore where others turn away, and rigorously challenge those in power.

We need your support to keep delivering quality journalism, to maintain our openness and to protect our precious independence. Every reader contribution, big or small, is so valuable.