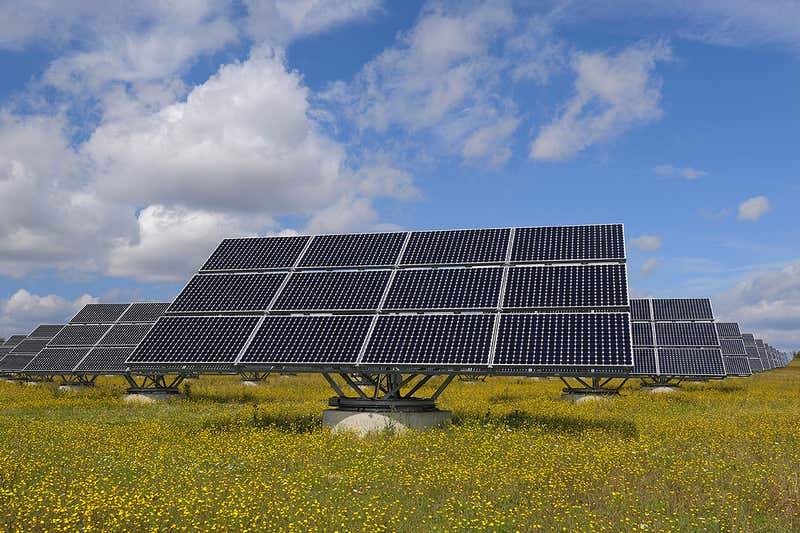 Double-sided solar panels that tilt based on the sun’s position could boost the amount of energy collected. The two approaches existed independently before, but researchers have now looked at the effects of combining them.

Carlos Rodríguez-Gallegos at the Solar Energy Research Institute of Singapore and his colleagues found that double-sided solar panels that track the sun would produce 35 per cent more energy and reduce the average cost of electricity by 16 per cent.

The goal for any solar panel is to absorb as much energy from the sun as possible, says Rodríguez-Gallegos. At present, solar panels around the world are predominantly installed with a fixed orientation, and absorb light only from one side.

The advantage of using two-sided solar panels is that they can also absorb energy that is reflected by the ground onto their rear side, says Rodríguez-Gallegos.

In their analysis, the team calculated the global energy generated by a variety of combinations of different solar panel set-ups.

They analysed global weather data from NASA’s orbiting Clouds and the Earth’s Radiant Energy System instrument and then estimated the total energy generated in different set-ups. The team found that double-sided panels would produce 35 per cent more energy when combined with single-axis trackers, and 40 per cent more in combination with dual-axis trackers.

The group also factored in the costs involved in the materials, construction and maintenance of these solar panels, which differs between countries.

Combining double-sided panels with single-axis trackers would reduce the levelised cost of electricity – an indicator of how much a consumer pays per kilowatt hour of solar energy produced – the most, by 16 per cent for the majority of the world, says the team.